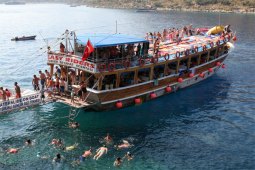 27 hours after stepping onto a bus near Urfa, I finally arrived in Fethiye, Turkey. I set my pack on the bed and reached down to take off my Teva sandals.

What I saw was shocking… my ankles were swollen as big as hams, bulging around the sandal straps. Suddenly I had sympathy for the old women I’ve seen whose ankles hang like water balloons, pouring over their shoes.

Guess all those hours in buses did a number on me.  I didn’t realize when I got into the first one just how long it was going to take to get across the country, from the eastern Kurdish region to the west and the Aegean. But I skirted a severe case of deep vein thrombosis and made a note to myself to 1) avoid long bus trips if possible, and 2) stretch and exercise more during breaks if I have to take a long bus trip. 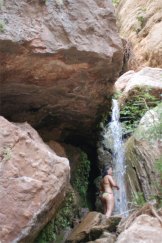 I came to Fethiye (called Telmessos in ancient times) to see some of the Aegean blue I had seen in Greece nine years before. What I really wanted to do was take a four-day sailing trip — what they call a “blue cruise” here — but I wouldn’t have the time on this trip. So I spent the first evening walking along the sea front and enjoying the night life at the various restaurants that skirt the harbor. And I booked a “12 Islands Cruise” for the following day.

The double-decker boat was filled to the brim with tourists (at least 150 of them): many families and lots of kids. It wouldn’t be my usual choice for a tour, but it was fun to watch everyone else having such a good time swimming and horsing around.

I sat at a booth with two young Korean gals, who smoked thin cigarettes and chatted with each other (they turned out to be staying in the same hostel, and I would see them again several times in the next two days). And an Australian family with two pre-teen girls (one a fiery redhead, the other a skinny blond), who each listened to her own iPod. They would mime the songs and do sign language to the tune they were listening to, trying to see if the other sister could guess what song it was. 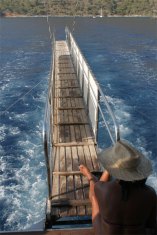 Somehow we only saw five of the 12 islands promised in the tour, but the sights on the five we did see were spectacular. The water was clear and warm (except at the spot where the cold spring spilled into the bay), and the vista from the top of one of the islands, where dozens of Byzantine ruins command a stunning view, and a little waterfall in the butterfly garden, made the trip worthwhile.  I even went down the boat’s tubular water slide once.