Mrs. Barton felt it was time she brought out the autoharp.

At Currie elementary in little Fowler, Ohio, we had no idea who Tim Rice or Andrew Lloyd Webber were. We only knew that there was a song getting radio play, and a young girl in our semi-weekly music class said it was about the Lord and included the lyric “Jesus Christ, superstar, who in the hell do you think you are?”

We all tittered at the thought of saying JC and hell in the same sentence – scandalous to a third-grader. The girl (was it Caroline?) insisted that it wasn’t scandalous, that it “was about Jesus and it was okay.”

Mrs. Barton frowned. It was not okay. Then she strummed her autoharp and made her point.  No one said hell in the real song. “Jesus Christ Superstar,” she sang. “Do you think you’re what they say you are?” 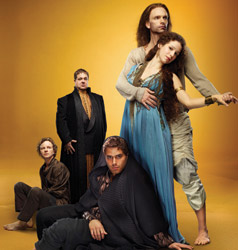 I hadn’t thought of Mrs. Barton in years until Friday night, as I wiped tears from my eyes and applauded a rapturous production of Jesus Christ Superstar at the Stratford Festival in Ontario. The rock opera/musical, which started as a concept album in 1969, came to Broadway in 1971 and was made into a film by Norman Jewison in 1973. It has a special place in my heart and the Stratford production brought back many great memories.

Director Des McAnuff (the Artistic Director of the Stratford Festival and a veteran theater helmsman who also directed Jersey Boys on Broadway) sets the the three leads – Judas, Jesus and Mary Magdalane – in a love triangle, based on thoughts by lyricist Tim Rice. As the trio grapples with what is best for Jesus and the movement he has spawned, they are intertwined in a tryst with destiny, and each exhibits different aspects and expressions of love: passionate agape and chaste romance.

It is a love that charges their passions and justifies their actions: Jesus to carry out a troubling conclusion to his own 33 years, Mary M who doesn’t “know how to love” Jesus and feels caught in the middle, and Judas Iscariot, destined to be the one who will betray Jesus, but certain he’s doing what’s best in the long run.  “And all the good you’ve done will soon be swept away,” he sings. “You’ve begun to matter more than the things you say.”

The import of the story goes without saying. But Superstar is special for what it accomplished beyond that story told each Sunday in houses of worship around the world. I love the music, the meter (featuring difficult-to-tap-your-toe-to beats like 5/4 and 7/8) and the patter, like this at the last supper:

I have friends who were turned on to Superstar in high school, but our house was too full of barbershop music (and I too into the soundtrack of Star Wars and the symphonies of Mahler) for that to happen to me. It wasn’t until the mid-90s, when friends did a production of Superstar with the Indigo Girls – Amy and Emily as Jesus and Mary Magdalane – that I got to know this show and its particular take on the Passion Play. That production – which went to SXSW and Seattle, and was put out as a video that featured my camerawork – starred some of Atlanta’s best performers, including members of Big Fish Ensemble, the Jody Grind, and Benjamin, the gravel-voiced drag queen front-man for Opal Fox Quartet and Smoke (and the subject of Jem Cohen’s documentary). And, the infamous Seed and Feed Marching Abominable band, that I had always wanted to pick up my trombone and join.

The only other production I had seen of JCS was on Easter in 1999, in Arequipa, Peru, when a local church group performed it in Spanish, two days after a Good Friday earthquake rocked the city at a magnitude of 6.4 (and shook me awake in the middle of the night).

In Stratford – where I used to go see theater when I was a college student in Ohio – the house was electrified by the beats and the message. And the cast was superb. I am certain it will come to New York, and I’ll be sure to share it with you then.

I wonder where Mrs. Barton is these days? I kind of hope she’s playing the autoharp in some retirement community, jazzing the fellow retirees with complex meter and rhyme, setting the record straight with the strum of a chord.

2 thoughts on “A Superstar to Remember”