Just learned that the Demolition Derby: Crash for Clunkers piece I shot last August at the Delaware County Fair placed 2nd in the sports video category of the Best of Photojournalism 2010, awarded by the National Press Photographers Association.

more about “Demolition Derby: Crash for Clunkers“, posted with vodpod 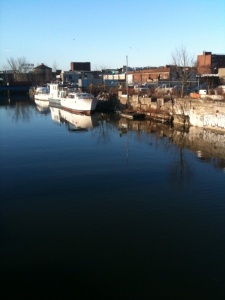 My sister and I long wondered why the stream of water that ran from the woods by our childhood home was the “crick,” but a similar stream next to our grandparents’ place in Mecca, Ohio, was “the brook.”

I was thinking of that today as I read the announcement that the nearest body of water to my new home — in Park Slope, Brooklyn — is about to get a long-overdue cleanup. The Gowanus (pronounced go-WAH-nuss, as much as the canal itself may look like it should be pronounced another way) is an old industrial canal, and it has just been designated a Superfund site by the EPA. It hasn’t frozen this year, which makes me think there’s been enough antifreeze spilled in it over the decades that Apolo Ohno will never set foot on it. There are plenty of jokes about it being lined with the bodies of mob hits. It doesn’t have a bottom, it just gets thicker. And the colorful sheen on its surface likely discolors the down feathers of the ducks, who seem oblivious to its toxins.

Still, I enjoy crossing it regularly, on the odd little drawbridges and sliding roadways that were once raised and pushed aside to allow canal barges to navigate the 100-foot-wide path. I look down the canal and wonder who lives in the little houseboats behind the parking lot where I pick up my zipcar on grocery days. And I plan to join the Gowanus Dredgers Canoe Club this spring

You can tell the change of seasons by the difference in the smell. And I’m strangely looking forward to this year’s algae bloom.

For those of us who hoped the EPA would begin the cleanup, it smells a little like victory.