This video profile of Dr. Donald R. Hopkins, vice president of health programs at the Carter Center, was released this week on NYTimes.com. I met with Dr. Hopkins a couple weeks ago in the office in his home in the Lincoln Park neighborhood of Chicago. We chatted about his long career in public health, and he introduced me to his dead, pet Guinea worm — a specimen of a parasite that causes a painful affliction that Dr. Hopkins, along with former President Jimmy Carter, has worked for decades to eradicate. And they are tantalizingly close to achieving their goal.

Click here to read the beautifully wrought profile — Another Scourge in His Sites — by Donald G. McNeil, Jr. 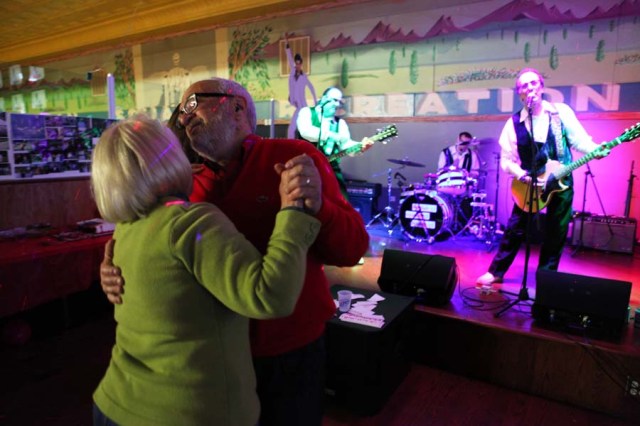 I’m a little late on this, but I spent St. Patrick’s Day at Lincoln Square Lanes (a new discovery/favorite place in my neighborhood), where a trio called the Polkaholics played polka rhythms on rock instruments. Their sets included favorites like the Beer Barrel Polka and the Hokey Pokey, which had the crowd dancing and sweating and screaming and hooting. The three musicians — “Dandy Don” Hedeker (on lead vocals and guitar), “Blitz” Linster on bass and “Stylin’ Steve” Glover on drums — played in a style that’s a delightful mix of Frankie Yankovic and Weird Al Yankovic.

It made me a little nostalgic for Ohio. On Sundays when I was growing up, there was a show on a Cleveland TV station (WEWS) called Polka Varieties. The show’s opening announcement dubbed Cleveland the “Polka Capital of the World.” I used to watch the show with my grandparents in Mecca, Ohio. I don’t think Grandma would have liked the rock-influenced version of the thrashing oom-pah band that are the Polkaholics (not as much as I do), but she probably would have danced anyway.

CORRECTION/COMMENT: Because I was in a hurry (and, well, lazy), I misnamed the band members in my original post because I cut and pasted from an old bio instead of reading my own notes from the evening. Those names have been corrected. Also, at the request of the band, I removed an observation you may see referenced in a comment below. A rather rough couple making an inappropriate gesture was an interesting thing to note in a blog, but on further reflection I can see how one word used to describe the gesture would color this post in a way I did not intend, so I’ve removed it.

On Easter morning, the Community Christian Church of Lincoln Square held an Easter Egg hunt for the kids in the neighborhood at Winnemac Park. I used it as opportunity to get out with my camera on a fine spring morning. Great fun. Cute kids. See for yourself.