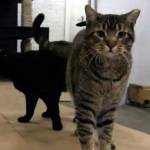 Medill Reports had its first viral video hit on Facebook in the spring quarter, when Kat Lonsdorf’s story “The Feral Feline Brew Crew” garnered nearly 6 million views. The video was an assignment to create a social-media piece that combines video, interviews and graphics, all tailored so it can be viewed without sound on a mobile device. Kat told the story of Empirical Brewery, a Chicago craft brewhouse who worked with a local non-profit The Treehouse Humane Society to put feral cats to work to keep rats and mice out of the brewery’s grain.